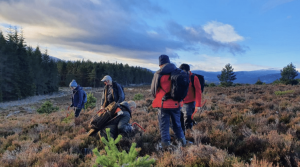 Rothiemurchus, Glenmore and Abernethy Forests together enjoy over 1 million visits a year – but they’re also home to capercaillie. The Cairngorms Capercaillie Project aims to secure a future for the species in the UK and Rothiemurchus and our Biodiversity Manager Peter Ferguson have been playing a key role in this project over the past 18 months.

Habitat improvement work will have a big impact for the species and over many years, work has been taking place at Rothiemurchus including improving and expanding the forest through natural regeneration and restocking with native species such as Scots pine and more recently trackside screening.

The images on the left and centre show trackside screening work in progress and right, the completed work in this area. Trackside screening encourages wildlife, like capercaillie, to use these areas as refuges, where they can be undisturbed. 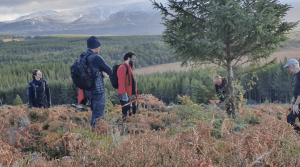 Habitat improvement work has also included the felling of non-native tree species such as spruce.

And fences such as this one have been altered so that Capercaillie are encouraged to fly over them rather than into the wire on fences which can be a cause of injury or fatalities in the species. 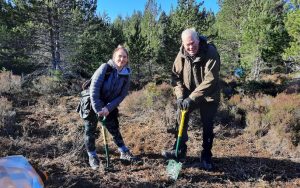 Robocutting in certain areas took place and then volunteers have helped create grit beds to stop capercaillie having to travel on paths and tracks where they may get disturbed to find grit. Grit helps capercaillie digest their food. Dust baths have been created for the same reasons to reduce disturbance and should help capercaillie keep their feathers healthy.

The Cairngorms Capercaillie Project is funded by the National Lottery Heritage Fund and work will continue until July 2023, with communities in the park participating in and developing solutions to help the species.