A few common trees species at Rothiemurchus push at the boundaries of what we might know as woodland; rowan, downy birch and Scots pine reach altitudes where few other species can survive due to the harsh winds and freezing temperatures. 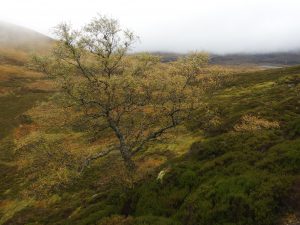 Recently staff from Cairngorms Connect went looking for seed from birch growing in remote Coire Creagach at 700m above sea level, knowing that if these trees are producing seed, the trees that grow from this seed should be well adapted to being planted into similarly remote and harsh locations. Despite this year being a bumper year for fruit and seeds at lower altitudes, the seed hunters came back empty handed.  Trees in such remote locations may build up their reserves over 4 to 6 years before spending energy on flowering and in June and July 2022 some night time temperatures at this altitude were well below freezing.

Elsewhere in Gleann Einich trees are establishing by their own accord. Pine and birch seed is small and light and can travel long distances on the wind. Rowan is dispersed by birds that head into the high cories looking for other berries.  Growth rates are so slow at these altitudes that trees may only establish in locations least frequented by deer – rocky scree, steep slopes and windy hill-sides. Growth is also curtailed by winds that snap stems or drive sand and ice particles that strips bark off the stems, especially when there is little snow to cover the young trees. 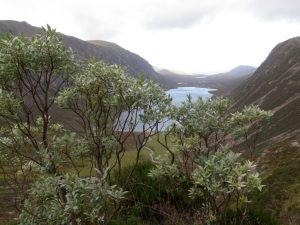 Salix Lapponum is a rare willow shrub (downy willow) that also survives at high altitudes, but now that the numbers of browsing animals in the hills has been reduced, its survival and expansion out of remote refuges is at risk due to the lack of snow that would otherwise protect it through winter months.