How many fish are there in our rivers?  And how do we find out? 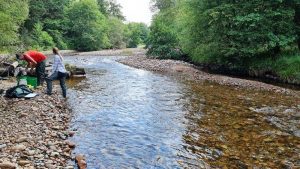 Well, that was the goal of a recent survey that Rothiemurchus took part in, Rothiemurchus participated in the The National Electrofishing Scotland Programme which is run by Marine Scotland with their partners in the local fishery organisations.  The good news is that there was an abundance of salmon fry in the river Druie.

The team were given 30 randomly generated grid references on river and they then go there and do an electrofishing survey to establish how many fish there are. The main focus is on salmon as the results of these surveys will ultimately become part of the Conservation Regulations.

During the electrofishing survey, a mild electrical current is used to temporarily stun the fish so that they can be netted from the survey site. The team also used anesthetic to sedate the fish whilst they were being processed – identified & measured with scale samples taken from the parr (fish aged 1+ years old) to check their age. The survey team also took DNA samples from the first 30 parr at each site as part of a study to assess the level of introgression by farmed fish genes into the wild population. They do not get many escaped farm fish in the Spey, so we expect it to be low here at Rothiemurchus. It may not be the same everywhere though. 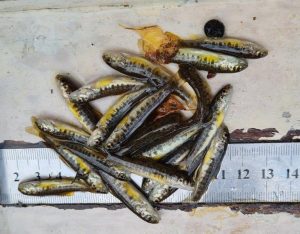 The results from the survey site on the river Druie here at Rothiemurchus were as follows – in a site 24.6m long they caught 144 salmon fry, 11 salmon parr, 25 trout fry, 1 trout parr and an eel. 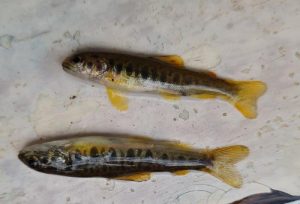