Pub landlord turned actor: Iain Wilkie’s story is one that wouldn’t be out of place on the big screen itself and it all started with a chance opportunity at Rothiemurchus last August.

Recent Netflix release Outlaw King was being filmed in the area at the time, the big budget movie which tells the story of Robert the Bruce was shot in several locations across Scotland including Loch an Eilein.  Iain, who was born in Aviemore had spent the last 22 years living in London but recently returned to the area to settle down with his young family when he spotted the ad for movie extras in the local paper.  Iain said “I thought it would be a fun thing to do so I went along to the recruitment day and landed a role as an extra.” 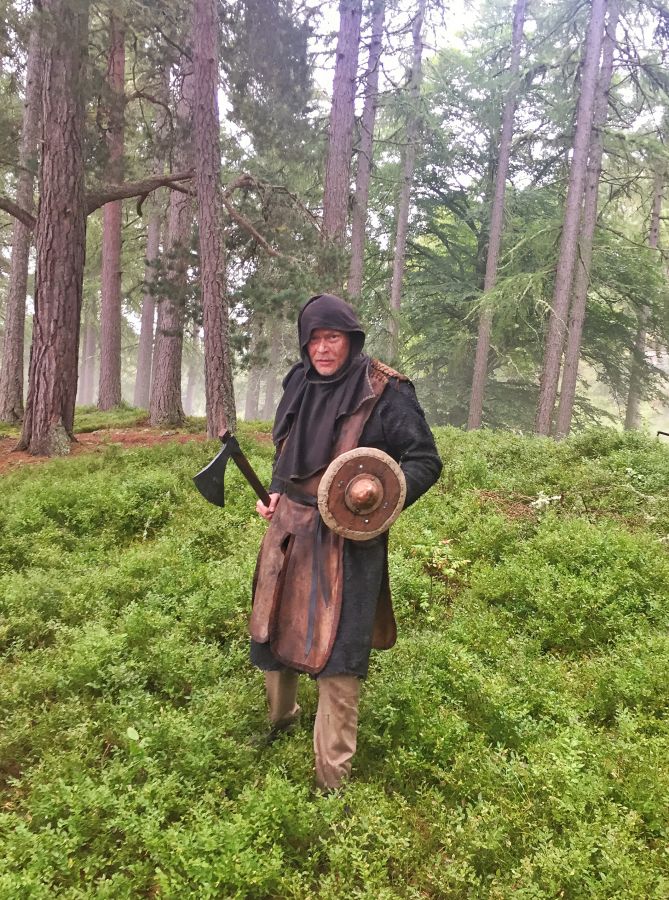 Iain on set at Loch an Eilein

On set at Loch an Eilein

Iain’s career in the film industry almost ended as abruptly as it started, as after 14 hours sitting in a tent on his first day on set, miserable and bored while it rained outside, Iain considered not bothering to go back for the second day.  “After all the waiting around, we were only on set for about 5 minutes and then got sent home.  We had to be back for 4.30 am the next day and I thought this is so boring, I’m not doing this.”  But Iain did go back for a second day and it was then that things got interesting.  “One of the featured actors in a fight scene had injured himself and needed replacing, the Sword Master asked me if I could do it and I jumped at the chance – I haven’t stopped working since.”

The sandy shore of Loch an Eilein was completely transformed for the movie, a medieval township was erected, boats and horses arrived and up to 200 cast and crew members were on set at a time.  Those familiar with Loch an Eilein will instantly recognise it in the Black Douglas battle scene. 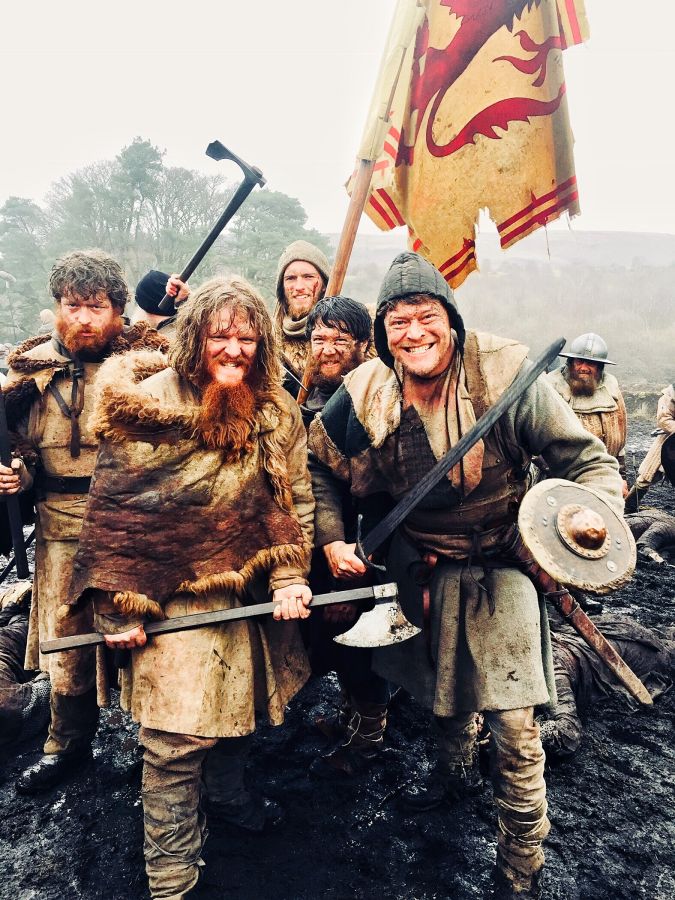 Once filming wrapped at Rothiemurchus, the producers asked Iain to join them on the other filming locations around Scotland and he ended up playing the roles of a MacDougall man, a Black Knight and an Islander at Dunfermline Abbey, Linlithgow Palace and Mugdock Park as well as his scenes at Rothiemurchus.

Iain got the chance to speak to the cast during his time as an extra, he recalls speaking to Chris Pine who plays Robert the Bruce and Aaron Taylor-Johnson who plays James Douglas, at Mugdock Park where they spent 3 weeks filming scenes for the Battle of Loudoun.  “They were really cool guys and it was brutal conditions, our days started at 1.30 am and we were on set until 7 pm in the freezing cold, up to our knees in mud.” 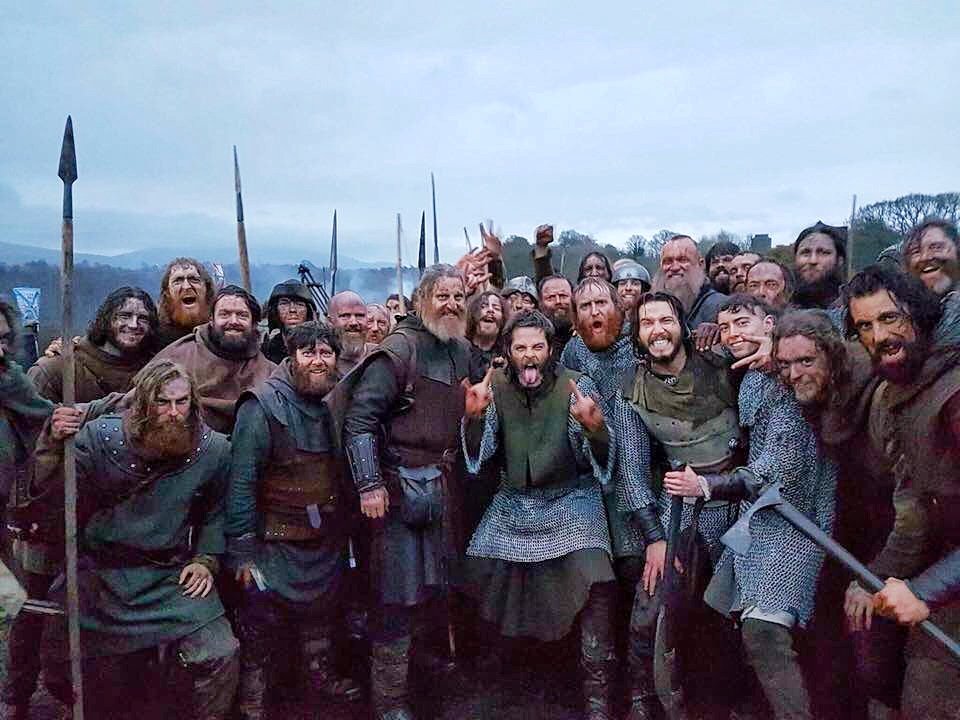 Chris Pine poses with the extras after a busy day filming

After Outlaw King Iain and some of the other extras followed the Netflix crew to Wales to film scenes for The King.  Ironically this time the group of Scotsmen were playing the English Army in the battle of Agincourt.  From there things spiralled for Iain with more extras and featured roles coming his way for productions like Official Secrets, A Private War, Vanity Fair, Men in Black 3, The Fast and the Furious, Wonder Woman 2 and Rocket Man as well as the land the role of body double for James Norton, (tipped to be the next James Bond!) in spy thriller Gareth Jones. “The types of characters I’ve been playing vary lots, I’m getting to do so many different things and am now starting to get proper acting roles.”

Some of those acting roles include the hugely popular Netflix series The Crown and HBOs Game of Thrones.  Iain is dying to tell us about his part in HBOs Game of Thrones, but he can’t.  “I’m not allowed to talk about what I did, all I can say is I was there.  We were in Belfast filming for the long nights battle – it’s the biggest ever battle scene in cinematic history.”  We’ll have to wait till next year to find out what Iain’s role in Game of Thrones was when the final season of the show is aired. 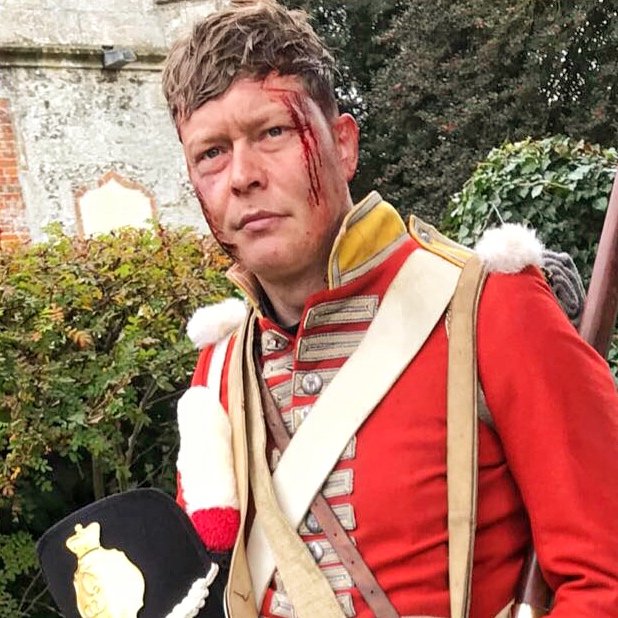 Some of the crew from Outlaw King also worked together on Game of Thrones and other productions so Iain came up with the idea of a group to keep in touch.  ‘Beautiful Bearded Bastards’ named after the all the “good looking guys with beards” was born.  “It started with about 100 of us and now there’s almost 700 in the group.  It’s not just extras, we’ve got actors, producers, directors… You can easily spot us on set as we have our own t-shirts. We’ve got members all over the UK who support each other with advice on how to get into the industry, places to stay, transport etc, it’s not just men either, in fact about 50% of the BBB’s are women.” The BBB’s have a strong connection to extras agency RentaCrowd, a great place to start for those interested in experiencing some of the things Iain has done.

“I’m not an actor, I just seem to be very lucky.  For me, being a complete outsider with a Scottish accent to be getting the jobs I’m getting, I haven’t had any formal training, I’m just blagging it but I’m always very honest about that!  All this was because of one day on set at Rothiemurchus, it’s incredible.”

Outlaw King is available to watch now on Netflix.

Click here to find out more about visiting Loch an Eilein.